The wives of governors in Nigeria, under the aegis of Governors’ Wives Forum, GWF, have declared total support for the National Drug Law Enforcement Agency (NDLEA) and its ongoing war against abuse and trafficking of illicit drugs, while seeking a formidable partnership that will secure the states and Nigeria from the menace of drug sub-culture.

According to a statement signed by Femi Babafemi, Director, Media & Advocacy and made available the supports for NDLEA was the highlight of a meeting between the leadership of the forum and the Chairman/Chief Executive of NDLEA, Brigadier General Mohamed Buba Marwa (Retd) at the Agency’s National Headquarters in Abuja on Thursday 3rd February 2022. Ekiti state First Lady and Chairperson of NGWF, Erelu Bisi Fayemi led the delegation, which includes First Lady of Kwara, Mrs. Olufolake Abdulrasaq; Imo, Mrs. Chioma Uzodinma, and Yobe, Hajiya Hafsat Kollere Buni.

Welcoming the governors’ wives, Gen. Marwa expressed appreciation for the visit, adding that the interest shown by them in the country’s drug problem shows their humanity and commitment to support their husbands engender a better society devoid of drug-induced criminalities.

“Let me put it on record that President Muhammadu Buhari is the number one drug fighter in Nigeria today because of all he has done to ensure the country wins the war against abuse and trafficking of illicit drugs. As such, we count on the states especially the governors’ wives as the pillars and partners through which citizens across the states, local councils, and communities are mobilized to reject this ravaging sub-culture”, he stated. 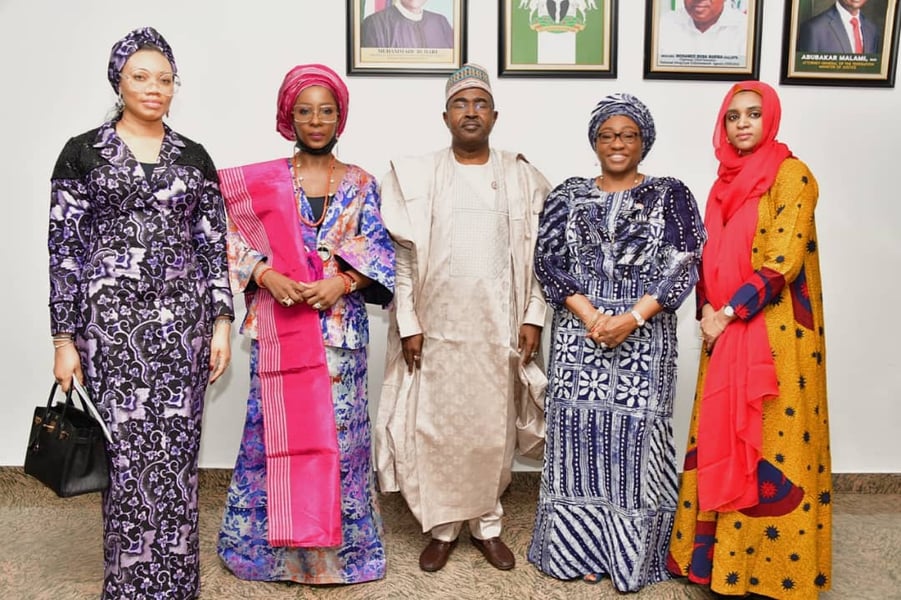 Wives Of Governors in group photo with NDLEA boss, Marwa

He charged the governors’ wives to work with their husbands to make the drug problem a major priority on their agenda; support the state commands of NDLEA with logistics; set up rehabilitation centres; provide jobs and skills for the youths; massive advocacy campaigns on state-owned media houses and mandatory drug tests for students, workers as well as intending couples among others.

In her remarks, Erelu Fayemi said they came on the visit to inform Gen. Marwa of their collective decision to adopt drug abuse as a flagship project “to address the alarming problem of drug abuse in our communities.”

According to her, “We are therefore here today to pledge our support for NDLEA to ensure that our country and communities become drug-free. We are not willing to stand by as mothers and see our children consumed by this menace.”

They presented four requests, all of which were instantly granted by Gen. Marwa. Their demands include that NDLEA continues to see State First Ladies as important allies in furtherance of the objectives of the agency; involve them in the fight against drugs as Champions in their respective States; help build the capacity of State Frist Ladies and their teams to be effective partners in the war against drug abuse and involve them in national and State campaigns against drugs.

In their contributions, the First Ladies of Kwara, Imo, and Yobe expressed their willingness to key into the War Against Drug Abuse, WADA advocacy agenda, and the National Drug Control Master Plan, NDCMP, of the agency in their respective states.

In like manner, leaders of the Nollywood industry under the aegis of Actors Guild of Nigeria, AGN, have declared support for the ongoing war against drug abuse in Nigeria even as they expressed their preparedness to join the crusade against the scourge.

They gave the assurance on Monday 7th February 2022 during a meeting with the Chairman/Chief Executive of the National Drug Law Enforcement Agency, NDLEA, Brig. Gen. Mohamed Buba Marwa (Retd) at the National Headquarters of the Agency in Abuja.

While commending the Nollywood actors and the entertainment industry for projecting the image of Nigeria, Gen. Marwa expressed confidence that the campaign against drug abuse in the country will go far with the offer of partnership and support from the leadership of AGN.

He said with drug use prevalence in the country three times the global average, the Agency needs committed partners like the Guild to mobilise the citizentry against the menace. According to him, “A number of artists don’t only use, they also encourage others to abuse drugs through their work and activities on social media. 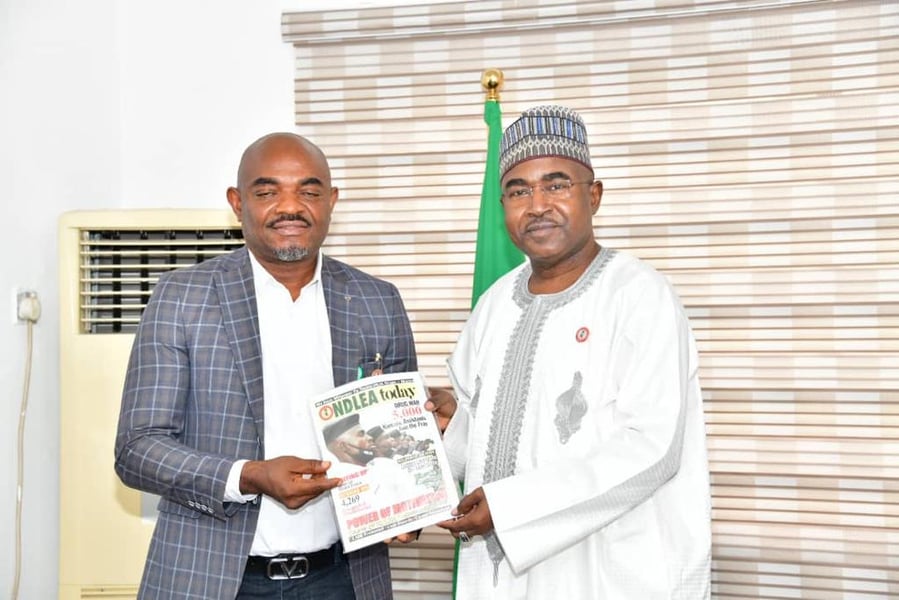 “We want the Guild to set good example by leading the war within its circle. Your movies must promote messages against the use of illicit drugs because the minds of millions are shaped by what they watch in movies. We need you to set up War Against Drug Abuse, WADA, committees within your industry.”

Speaking earlier, the National President of AGN, Emeka Rollas Ejezie said, “We are here today to affirm our complete support to your efforts in combating the menace of drugs in our society as we strongly believe will help reduce drug crime to the barest minimum.

“As a Guild of major influencers and in line with our set objectives to educate, inform and entertain as well as our avowed commitment to national development, we seek a mutually beneficial partnership with the NDLEA to leverage on the star-power of our members in promoting some of your transformation programs especially on drug trafficking and abuses.”

Listing the areas he will want the Guild to collaborate with the NDLEA, he “Majority of our members are youths and appeal to a generation of youths who are influenced heavily by internet content and social media.

We have therefore outlined some advocacy programs to enlighten Nigerian youths on the dangers of drug abuse and trafficking; they include but are not limited to: production of skits majorly for social media campaigns; drama series on negative effects of drug abuses, rehabilitations, eradicating the fear of stigmatization and advantages of total abstinence; engage some of our A-list actors as NDLEA Ambassadors to help use their star power to discourage the youths from doing drugs”, among others.

“We share in the dream of a better Nigeria where success will be the reward for hard work and not through drug trafficking and other drug-related offences.

The era of glorifying drug barons and criminals is far gone and the Actors Guild of Nigeria, as Ambassadors of Nigeria’s image, is readily available for advocacy campaigns, talk-shops, production of skits, playlets, feature films, etc. on the menace of drug abuse and trafficking”, he stated.

In the face of these supports from institutions and groups, the agency disclosed that over 22,160 kilograms of Codeine syrup, Methamphetamine, and Skunk have been seized at Apapa seaport and a notorious drug den, Akala, Mushin, Lagos in two major operations in the state by operatives of the National Drug Law Enforcement Agency, NDLEA.

According to Babafemi, while a total of 14,080kg codeine syrup (8,080 litres) and 4,352.43kg cold caps used to conceal the former in a 40ft container imported from India, were intercepted on Wednesday 2nd February 2022 at the Apapa port, Cannabis/Loud/Skunk imported from Ghana and Methamphetamine weighing 3,727.72kg were seized in an early morning raid at Akala, Mushin where 17 suspects including five females were arrested on Thursday 3rd Feb. The seizure at the Lagos seaport followed intelligence from foreign partners and the cooperation of other port stakeholders.

At Akala, NDLEA Strike Force operatives in their numbers with support from the military stormed fortified warehouses in the drug den and evacuated bags and bottles of cannabis, loud, skunk, skuchies, and methamphetamine as well as the 17 suspects for further investigation.

Meanwhile, a female drug kingpin, Mrs. Jemilat Seriki, who is one of the owners of 12,385 pellets of Loud imported from Ghana and intercepted at Eko Atlantic beach, Victoria Island Lagos on Saturday 27th November 2021, has been arrested by narcotic officers after weeks of manhunt. Mrs. Seriki, a.k.a Iya Ilorin, admitted being one the owners of the consignments seized, adding that her bags of drugs had ‘Jah Bless’ written on them.  When eventually identified and sorted, she has 16 bags with the inscription containing drugs weighing 668.85kg.

In Niger state, a 64-year-old former Divisional Police Officer of Idanre Police station, Ondo state, who was dismissed from service for drug offences, Mr. Monday George Chika, has again been arrested with an accomplice, Emmanuel Eniola, 40, with 280 blocks of compressed cannabis weighing 168kg. They were arrested on Sunday 30th Jan. in Mokwa, Niger state, after their Toyota Avalon car marked EKY 429 BZ (Lagos) loaded with the substance at Idanre and heading to Kanji, Borgu area of the state was intercepted.

At the Murtala Muhammed International Airport, MMIA, Ikeja Lagos, attempts by some traffickers to export different quantities of Methamphetamine to Brazil and the United Kingdom were scuttled by narcotic officers at the airport. The first bid was made on Friday 28th Jan. through the SAHCO export shed where operatives intercepted 0.80kg of Meth concealed in a relaxer plastic container heading to the UK. A suspect, Akuta Chioma Lucy who presented the consignment for the search had been arrested for further investigation.

The second attempt was on Friday 4th February during the outward clearance of passengers at Gate ‘C’ Departure hall of the airport when an intending male passenger on an Ethiopian Airlines going to Brazil, Onyeaghala Chidi was intercepted with 500grams of Meth concealed inside three plastic hair relaxer containers. Also at the airport, a male passenger, Iliyasu Yushau Yushau, coming from Kampala, Uganda via Nairobi, Kenya was intercepted by operatives with 268 debit cards belonging to Access Bank, GTBank and Zenith Bank, during the inward clearance of passengers on the flight on Sunday 30th Jan.

While operatives in Delta state arrested a 21-year-old student of Federal Polytechnic, Auchi, Kate Osagie over a 17.6grams designer drug she ordered from Onitsha, Anambra state, their colleagues in Borno state on Thursday 3rd Feb nabbed one Fatima Musa, 30, for attempting to smuggle pentazocine injections into the camp of surrendered insurgents.

In Plateau state, operatives intercepted a truck marked LSD857XB coming from Ekpoma, Edo State with 885 blocks of cannabis Sativa that weighed 736kg. An N400,000 paid to bribe the arresting officers has also been warehoused as part of exhibits for prosecution, just as two suspects; Ebunoluwa Babalola, 40, and Sulyman Sheu, 30, were arrested at Ganmo, Ilorin, Kwara State with 90kg of Cannabis.

In the same vein, 2kg of Methamphetamine being brought to Abuja by a 29-year-old Charity Omuche from Anambra state was intercepted on Friday 4th Feb by operatives at Gwagwalada area of the FCT, while officers of the Kaduna Command of the Agency also arrested a suspect, Buhari Isah Umar with 300 shisha pens and 999 portions of synthetic cannabinoids with a gross weight of 9.690kg.

Chairman/Chief Executive of NDLEA, Brig. Gen. Mohamed Buba Marwa (Retd) has commended officers and men of the Strike Force, Apapa seaport, MMIA, Lagos, Niger, Edo, Borno, Plateau, Kwara, FCT, and Delta Commands of the Agency for the successful interdiction operations that led to the seizure of thousands of kilograms of illicit drugs from across the country in the past week. He charged them and their compatriots in other commands not to rest on their oars.