Fani-Kayode’s defection was disclosed when Mai Mala Buni, Chairman of the All Progressives Congress (APC) Caretaker Committee presented him to President Muhammadu Buhari.

He was presented to Buhari at the Presidential Villa, Abuja on Thursday.

Why Fani Kayode Decamped To APC

Speaking after the meeting Fani Kayode said that he was led by the Spirit of God in his decision and that he joined the APC to help for the unity of the country, adding that he was against anything that would cause the disintegration of Nigeria.

He informed that he was instrumental for the exit of three Peoples Democratic Party governors to the APC.

The governors he mentioned were Dave Umahi of Ebonyi State, Ben Ayade of Cross River State, and Bello Matawale of Zamfara State.

Years back, 2018 to be precise, Femi Fani-Kayode has tweeted that he would rather die than join the APC.

Fani-Kayode on his Twitter handle said that he was not taken aback that the Obanikoro and Iyiola Omisore have gotten their passports back from the Economic and Financial Crime Commission, EFCC, and that they are now in the United State of America.

Fani-Kayode alleged that they joined the APC to avoid persecution

It really is a pity that @ShehuSani will not be going back to the Senate. He was a strong voice and a great advocate of justice and peace. How I wish he had left APC long ago and joined PDP. I have always had immense respect for him and he remains a good friend. I wish him well. 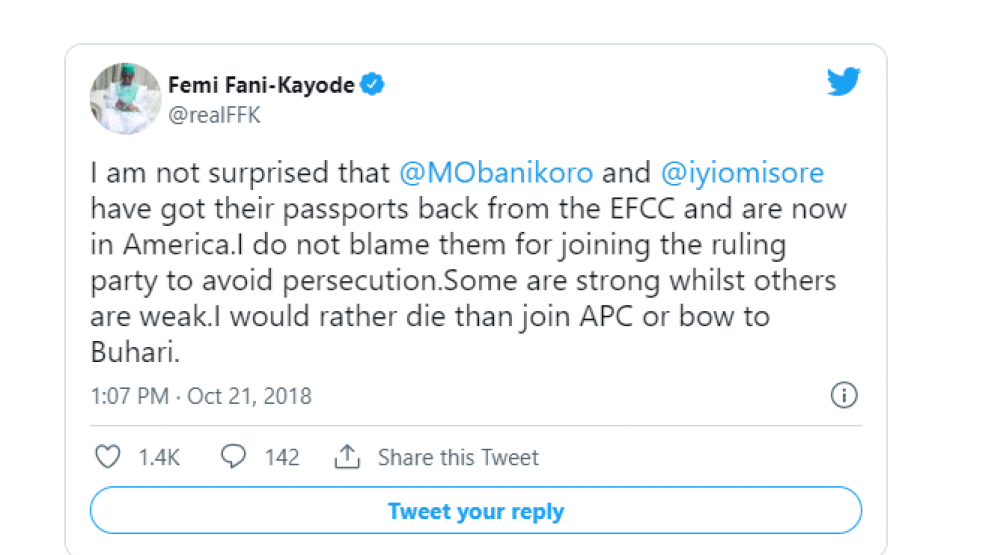 Fani Kayode: The Cow-lover And His Other Names By Akinleye Segun